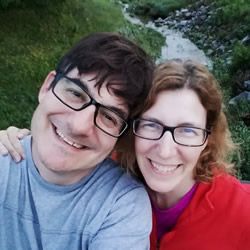 What makes you come to work everyday?

Life has hurdles. It’s easy to get discouraged. We can talk to friends and family and we can distract ourselves with a screen or a book. But only one thing can provide true catharsis -- the arts. To draw or to paint, to sing or dance. Everybody has their art; mine is to play the piano.

The arts are the forgotten remedy. To create art is to get a booster shot right in to the wound. I’m not a physician, a pharmacist or a therapist, but I’ve felt what music and art can do for me, and I’ve seen what it can do to others. I come to work to dispense the salve. I come in to work so that I can help people heal.

What is a little known fact about you?

The longest I have ever lived in one place is right here in Lincoln. I’ve lived on three continents, in three countries, five states and eight cities, and went to seven schools. I moved from South Africa to America when I was 15 and I voted in just one South African election – for Nelson Mandela in 1994. I became a US citizen during my lunch break on Flag Day, 1996 -- I walked from work at Carnegie Hall to the Javits Convention Center, became a US citizen with about 4,000 other people, then walked back to work through Times Square, with time to spare for a sandwich. On my desk were two gifts from my co-workers: a T-shirt with an American flag, and a copy of Guns & Ammo magazine.

What is one of your earliest memories of art in your life?

When I was about 6 my father took me to a lunch-hour concert by the Johannesburg Symphony. They played Smetana’s The Moldau. It was the first piece of classical music I had ever heard, and the first time I heard a live orchestra. I remember the rush. Classical music has been at the center of my life ever since.

What makes you happy?

Return to Board & Staff