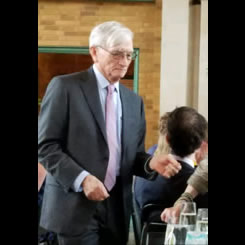 The Legacy of the Arts Award

Recognizes a senior (age 55 and up) actively involved in creating, teaching, sharing or inspiring artistic expression in any discipline.

Tice Miller arrived at UNL in 1972 to head a new graduate program in theatre and to teach and direct plays. By the time he retired in 2008, he had taught hundreds of students, supervised 29 doctoral candidates, written/edited five books, and directed thirty productions including Vaclav Havel’s The Memorandum before Havel was President of the Czech Republic. Other highlights include chairing the Department and serving as Executive Director of the Nebraska Repertory Theatre for eight years, working to bring the International Thespians in 1995, and creating the Mid-America Theatre Conference in 1980 with colleagues. He served as President of the UNL Academic Senate in 2002. Since retirement, Tice have been a docent at Sheldon Art Museum (2008-2018) and has served a 3-year term on the Jury for One Book, One Lincoln.